REAL DEAL participated in the Political Festival of Europe, which was held for the first time between the 25th and the 28th August 2022 in Mariager, Denmark. 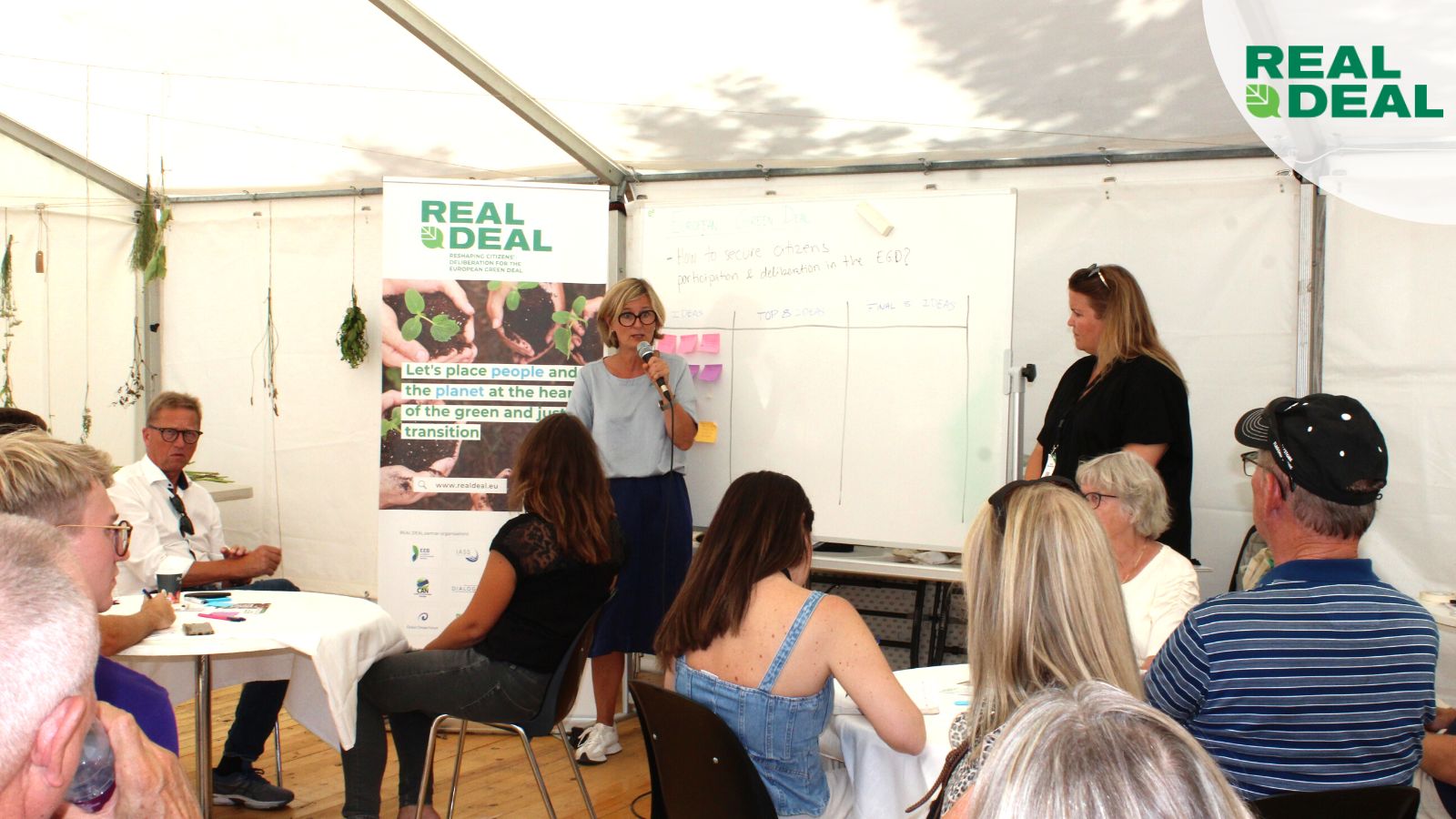 Pia Ahrenkilde Hansen (Director-General for Communication at the European Commission) and Asger CHRISTENSEN (MEP, Renew Europe) participated in one of the deliberative session organised by the REAL DEAL

The aim of this pan-European festival was to gather citizens and decision-makers from across the continent to strengthen the democratic conversation. In addition to the many debates that took place, the Festival was also a place for festivities and cultural celebrations. Between 18,000 and 20,000 citizens from across Europe attended the four-day Festival, according to its organisers.

Thanks to its dynamic and participative atmosphere, the REAL DEAL space at the Festival attracted the attention of citizens and media alike. Our activities were mentioned on DR, Danish national radio, in an episode that can be listened to, in Danish, by following this link.

Methods of deliberation in practice: the “crazy 8”

REAL DEAL held participatory and engaging activities which were open to everyone attending the festival, from citizens to decision-makers at national and European level.

The highlight activity was the so-called "Crazy 8", in which participants were divided into groups and asked to brainstorm 8 solutions to the challenge of involving citizens in the green and just transition, and to do so in 8 minutes. With the help of experienced facilitators and moderators, participants were encouraged to find consensus on the final 8 ideas.

REAL DEAL invited policy makers and civil society and youth leaders to participate in the “Crazy 8” sessions, so that they could listen to the final ideas and engage in a discussion with the citizens.

Pia Ahrenkilde Hansen (Director-General for Communication at the European Commission) and Asger Christensen (MEP, Renew Europe) participated in one of the deliberative sessions, moderated by Julie Rosenkilde, Director of Nyt Europa and Jacob Jørgensen, Project Manager at Nyt Europa.

Image 1: Pia Ahrenkilde Hansen (Director-General for Communication at the European Commission) and Asger CHRISTENSEN (MEP, Renew Europe) participated in one of the deliberative session organised by the REAL DEAL 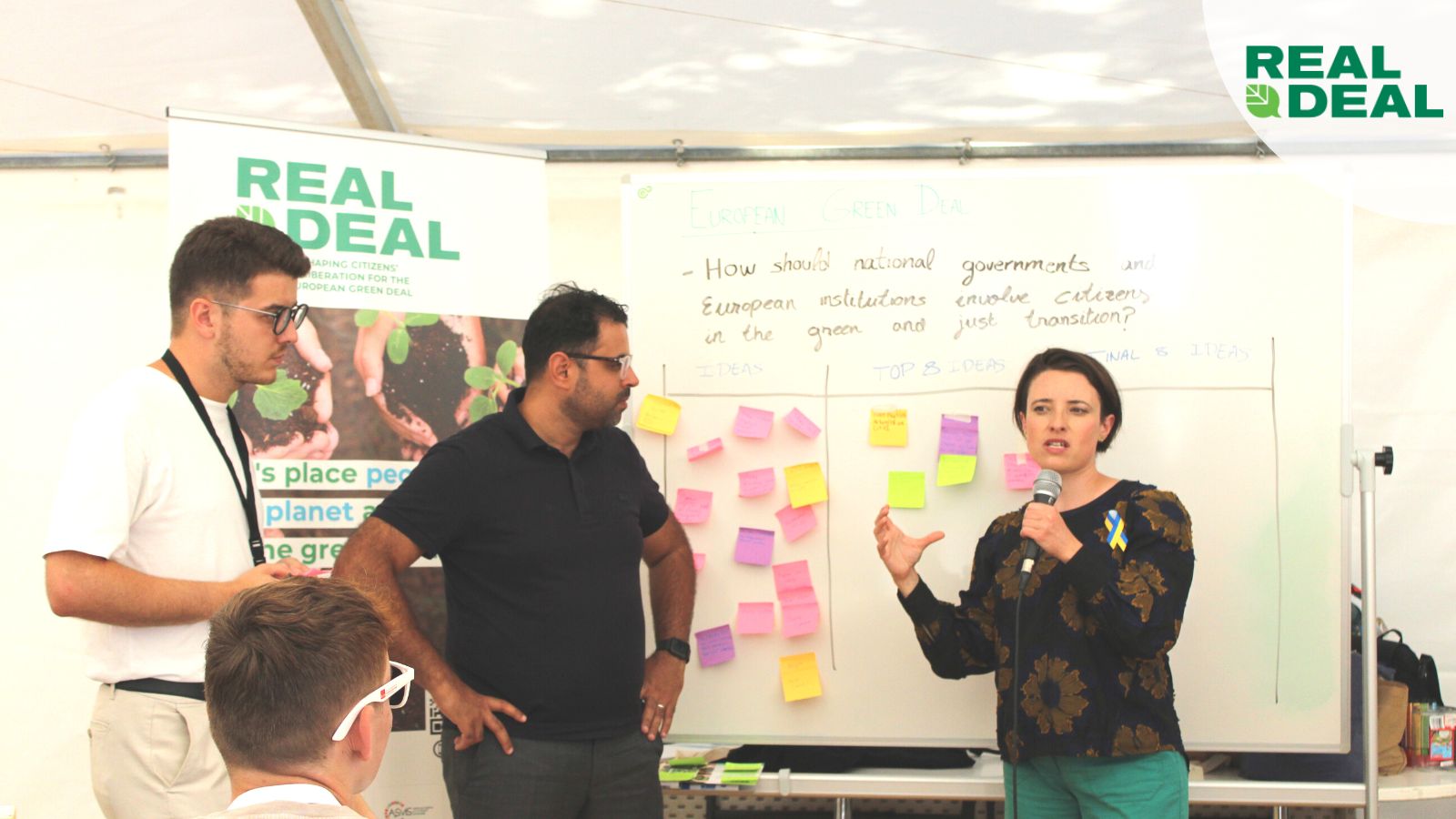 Image 2:  Karen Melchior (MEP, Renew Europe) and Mohammed Chahim (MEP, Group of the Progressive Alliance of Socialists and Democrats) interact with the participants.

Kristina Naunova, Network Development and Project Coordinator at Climate Action Network (CAN) Europe, and Lucía Sánchez Sierra, Project Coordinator at Youth and Environment Europe (YEE) held a “crazy 8” workshop in which the youth were the protagonists. They also invited participants in a session where they needed to speak in the name of nature and move beyond anthropocentric interests in deliberations about the green and just transition. 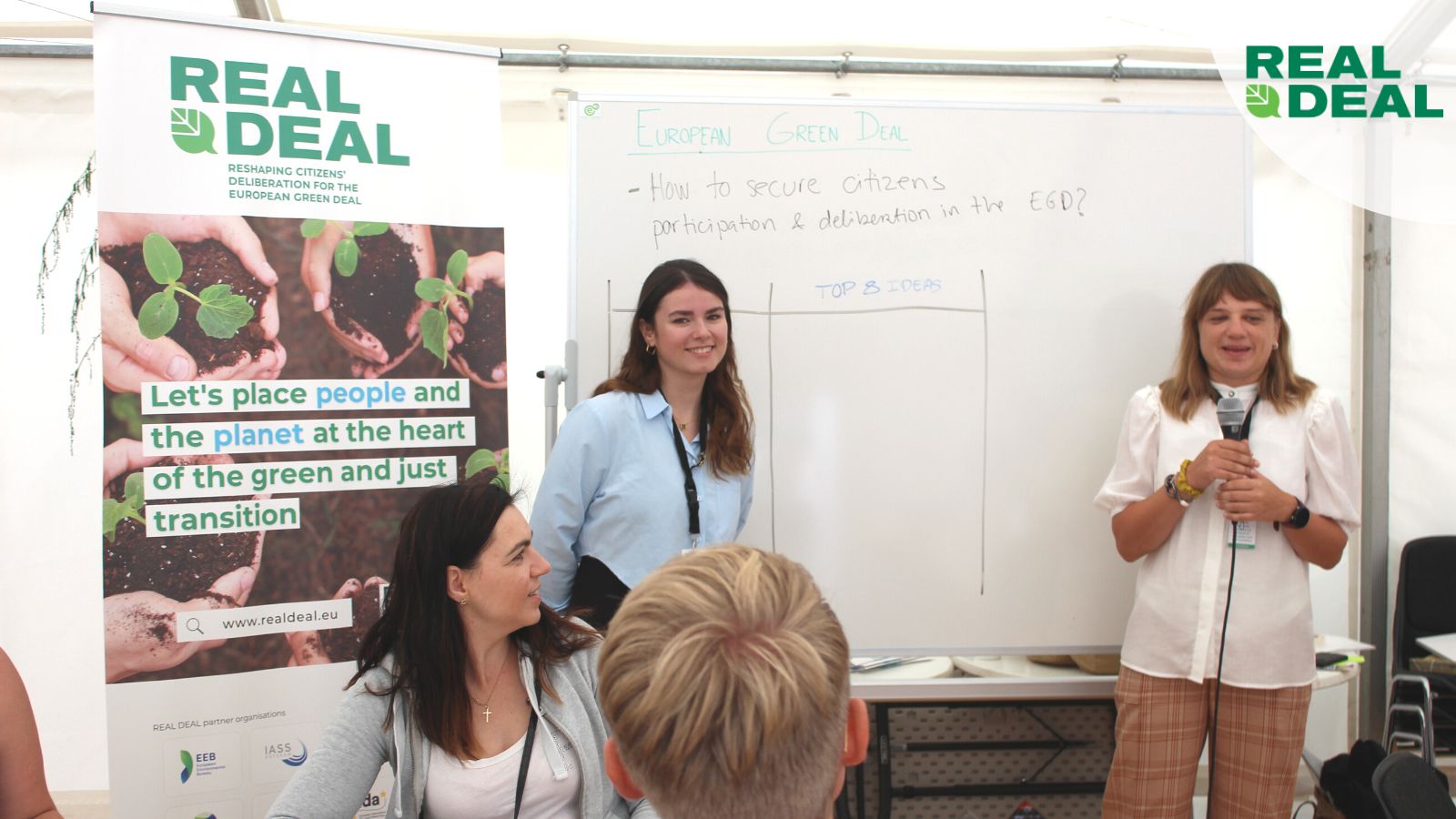 The conclusions from these sessions include, but are not limited to:

Attendees of the Political Festival of Europe also had the opportunity to exchange views on a wide-range of issues such as the latest innovations in deliberative democracy, the state of the European Green Deal (EGD), the role of EU cohesion funds in the green and just transition, deforestation, the priorities of youth or the challenges of communicating the EGD.

Starting with the topic of deliberative democracy, REAL DEAL presented the latest case studies of citizen assemblies that took place in Austria and Ireland and discussed the main lessons learned from them.

The REAL DEAL project coordinators, Ingeborg Niestroy (IASS) and Manuela Gervasi (EEB) were the speakers of the workshop on innovating democracy in the European Green Deal. The session was moderated by Patrizia Heidegger (EEB). 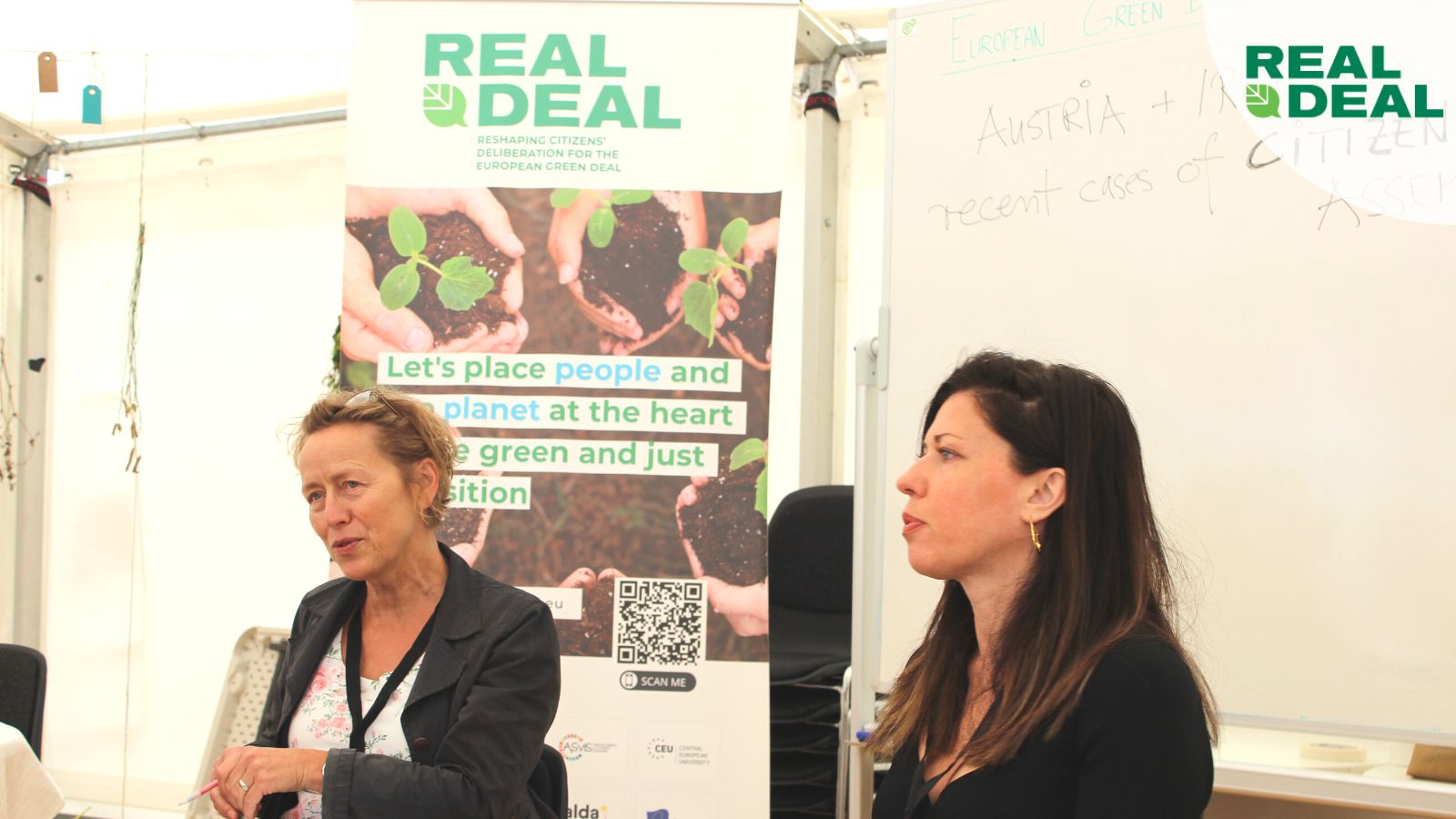 State of the European Green Deal

The state of the European Green Deal (EGD) was also subject to debate. Citizens attending the festival had to the opportunity to learn about the recent policy developments in the context of the EGD and discussed the challenges and opportunities presented by the green and just transition.

The speakers of this session were Mads Flarup, Secretary General of Greenpeace Norden, Ingeborg Niestroy, Project Lead at IASS and Coordinator of the REAL DEAL, and Patrizia Heidegger (EEB). The panel was moderated by Manuela Gervasi, Senior Policy Officer at EEB and REAL DEAL Project Coordinator. 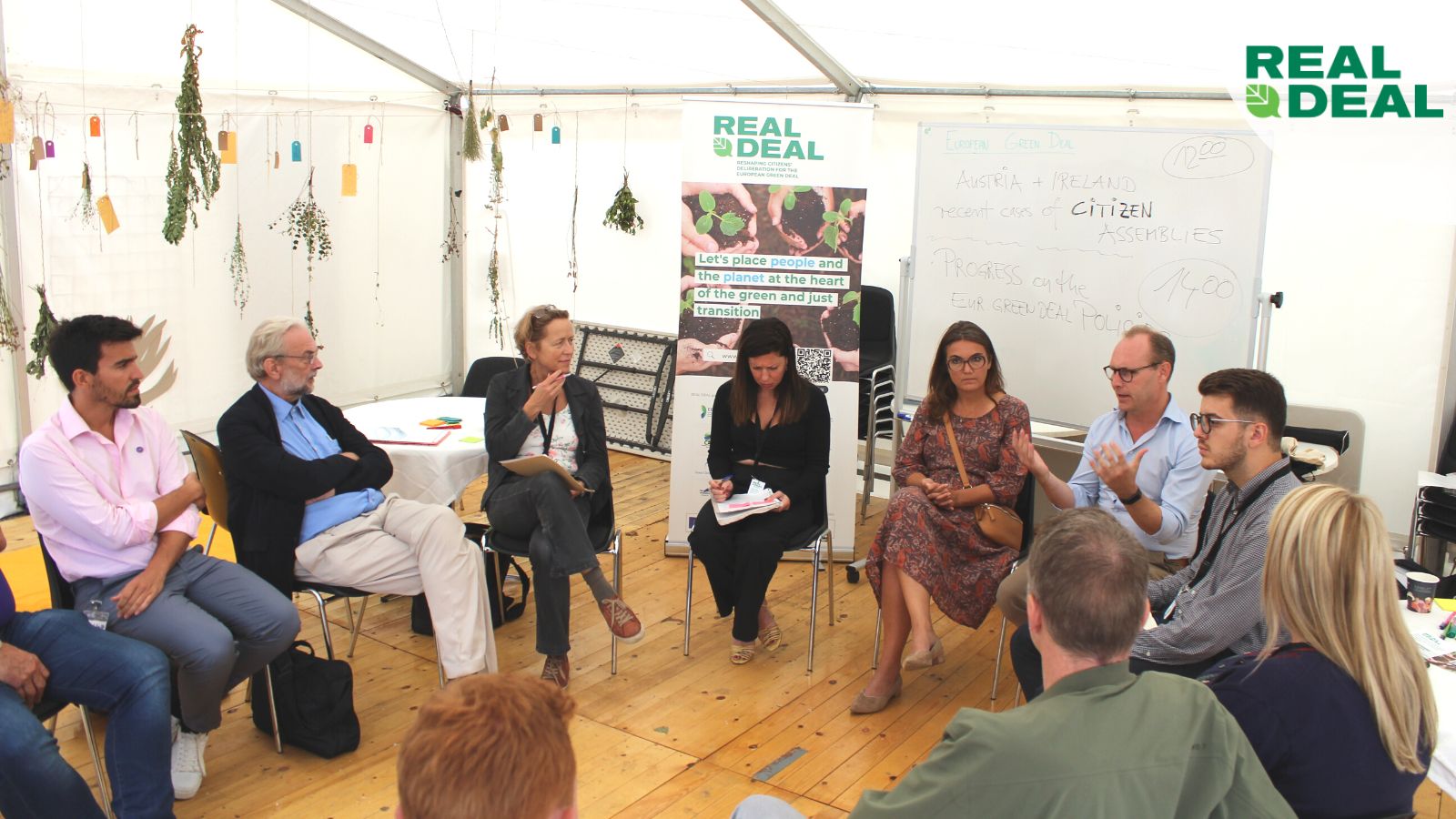 This panel discussion organised by Nyt Europa, a REAL DEAL partner, was aimed to discuss the opportunities of using cohesion funding to support new initiatives that promotes a circular and green economy and a socially fair green transition for the citizens while constructively touching upon barriers or experienced gaps in the structure of the funding processes.

The discussion was followed by a “tasting and networking” session where participants tasted Danish products developed by initiatives that had received support by European cohesion funds.

Our community aims at creating a new model of environmental citizenship, by which Europeans take action to make the green and just transition a reality. And all the actions matter, from the smallest to the biggest ones.

This is why REAL DEAL offered citizens attending the Festival the opportunity to learn basic urban gardening skills, such as rolling seed bombs with insect-friendly seeds, making a self-watering plastic bottle, and growing mushrooms in coffee ground. 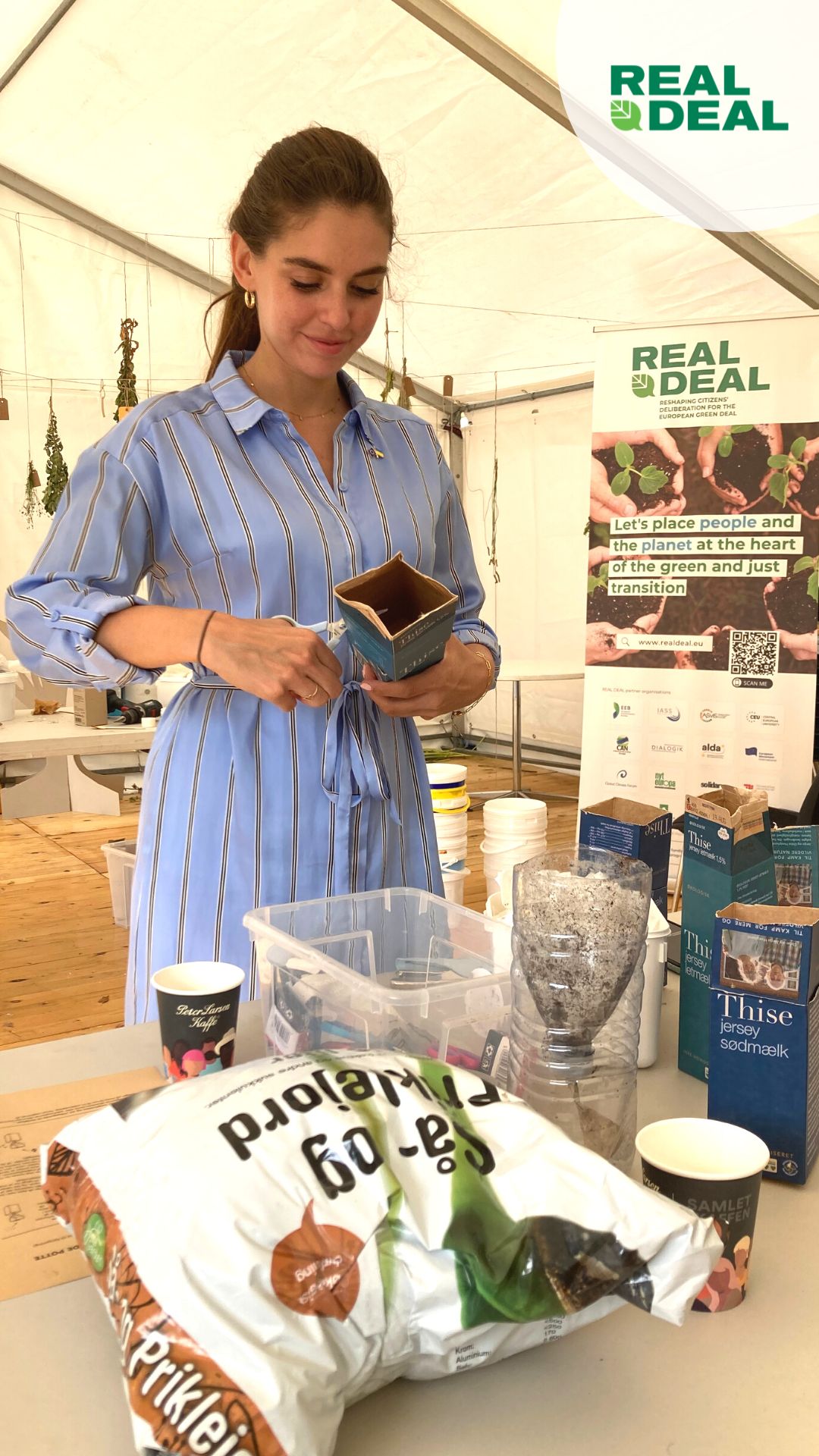 Image 6: one of the participants of the urban gardening workshop makes a self-watering plastic bottle

The workshop was organised by TagTomat, which works to create sustainable cities, where communities sprout around urban gardens, and the city's residual materials are upcycled and given new life with a circular aesthetic. 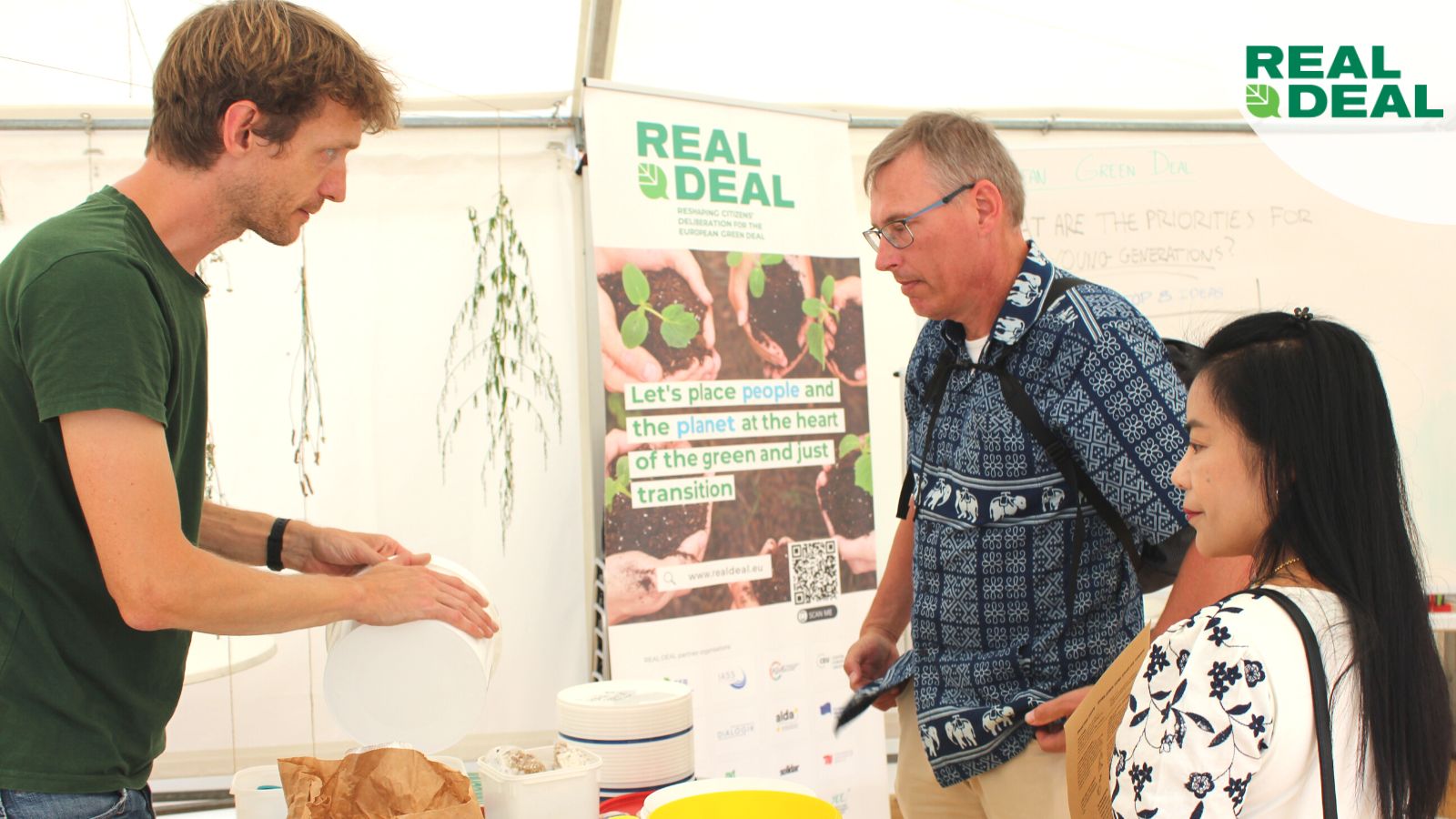 Image 7: the team at TagTomat explains to citizens how to grow mushroom in coffee ground

The REAL DEAL tent, a space for inspiration and hope for the future

REAL DEAL collaborated with Rikke Bogetoft, a local young artist, to set up a “sky garden” by harvesting local flora. The participants of the Festival left their messages for a more sustainable future hanging from the ceiling of the tent. 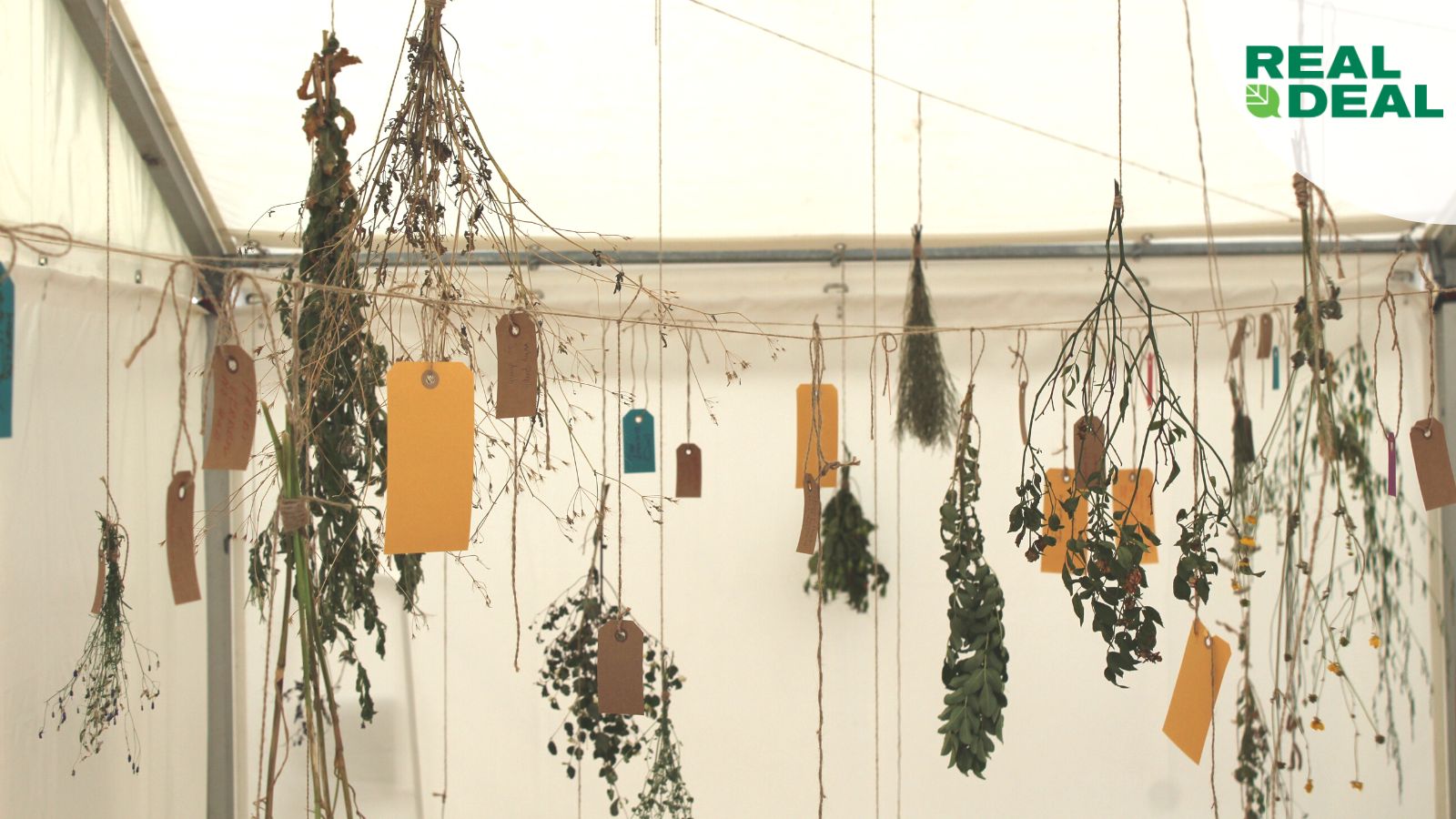 Image 8: images of the "sky garden" set up at the REAL DEAL tent 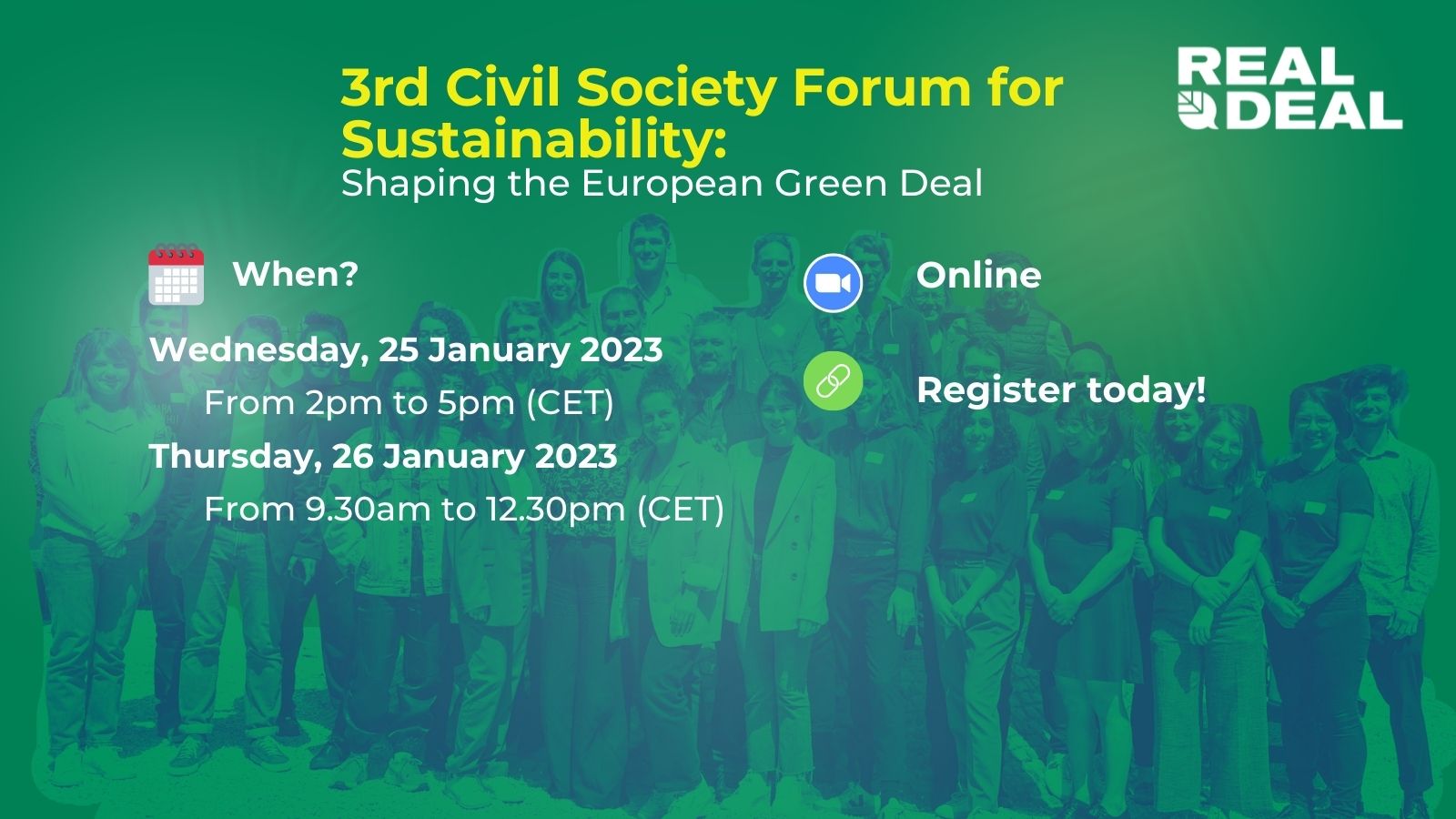 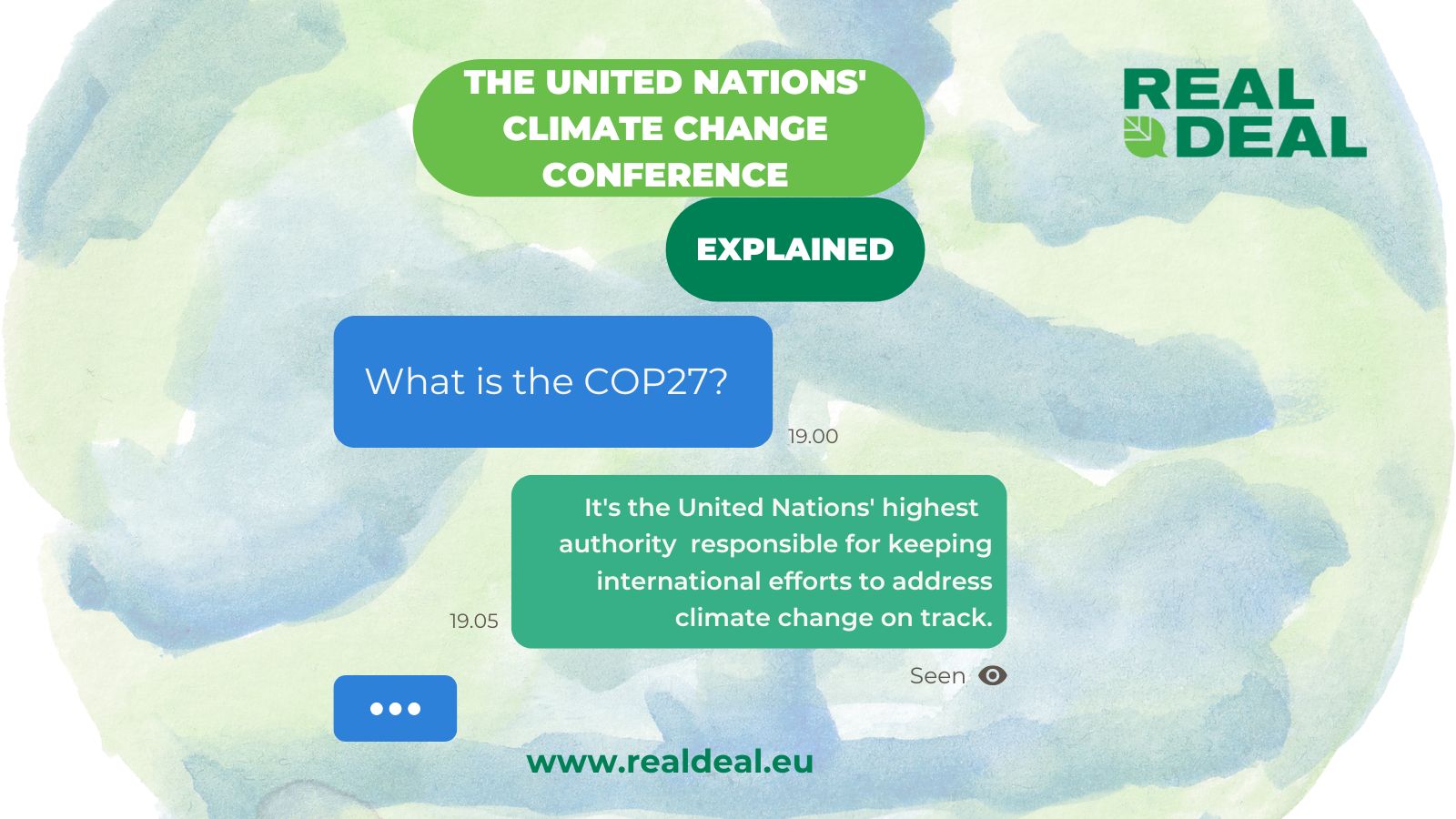 You probably heard about COP27 on the news, but what is it? And why is it so important? 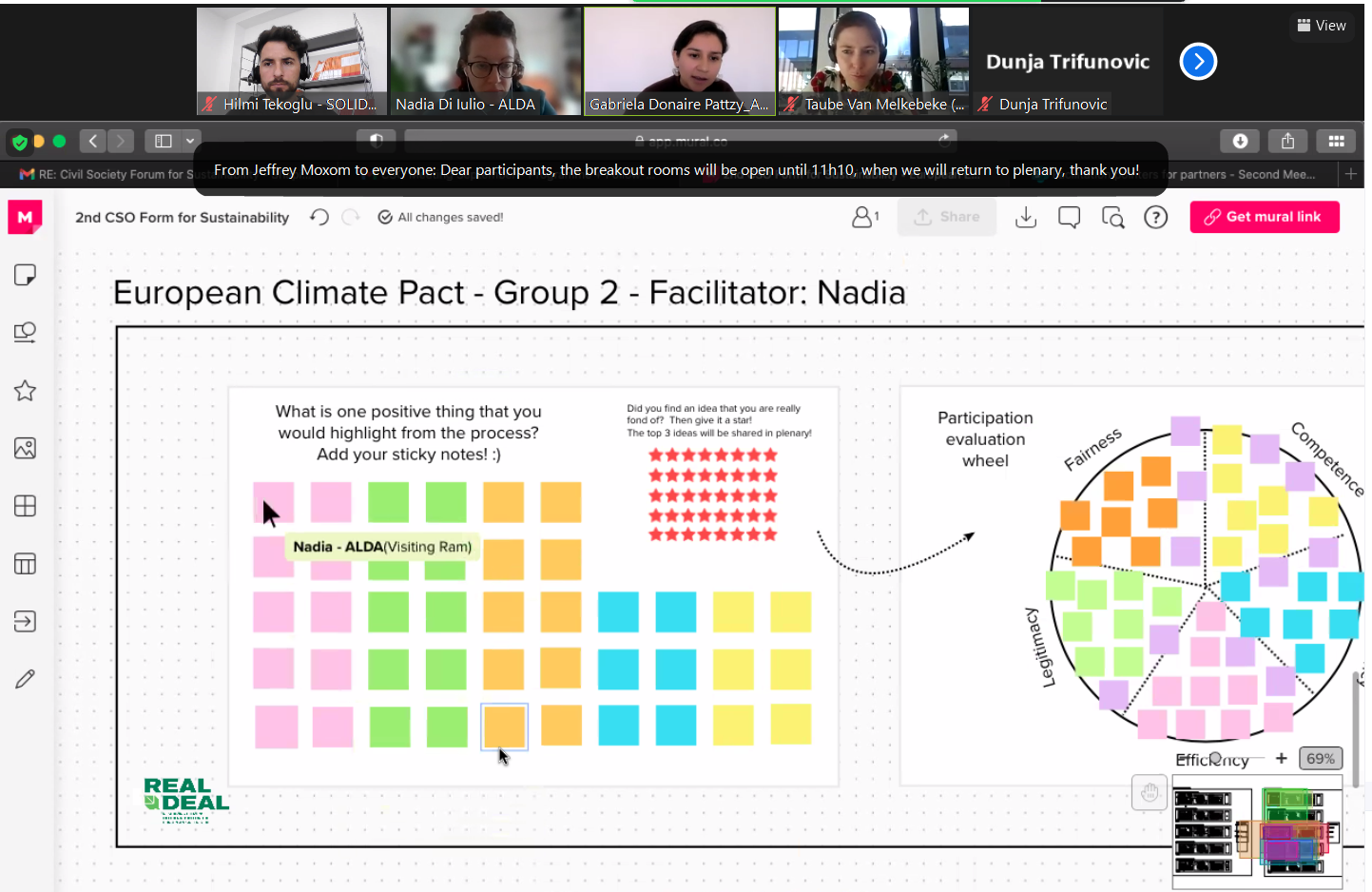 Civil Society Forum for Sustainability: Shaping the European Green Deal on the 21st and 22nd of September 2022, for two half-days of lively debate and discussion.